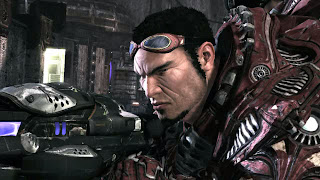 When I first saw the screenshots for Unreal Tournament 3 back in August 2005 I was really excited, not to mention worried that I wouldn't have a computer beefy enough to play it when the time came. Over the years I actually lost interest in UT3 and Epic Games because of their new direction to gaming that became vividly apparent at E3 2006. In the meantime Nintendo and Valve caught my interest, and I had all but forgotten about UT3 until the demo was announced a few months ago.

UT3 is out now, and as a UT fan I hate to say that I actually feel let down by the game.

There's a few reasons for this. First, the game hasn't changed much since UT2004 and has almost the exact same weapons and vehicles (with the addition of Necris set of vehicles). Epic combined the Assault and Onslaught game modes and left out Invasion, Mutant, Bombing Run, Last Man Standing, Domination and Double Domination. The art direction is explosively-ornate (which I'll write more about soon in my critique of the visual style of this and other games), and to top it off, the story mode for the single player campaign is ridiculous.

Previously you played a character competing in the Liandri Tournaments. This made the game mechanics and diverse environments make perfect sense, and gave Unreal Tournament a unique style that wasn't common at the time.

In UT3 however, instead of the player competing in a tournament, you are actually at war with the Necris. And that's where it immediately gets odd because the format is the same: you have Deathmatch and Capture the Flag games with respawning and everything. They clumsily explained why there are respawners and Capture the FLaG (Field Lattice Generators) matches in a serious sci-fi war in an attempt to tie in a paper-thin revenge plot into what's supposed to be the single player campaign for a multiplayer game.

I'm not sure why they decided to do that. The whole point of a single player campaign for a game like Unreal Tournament or Quake 3 Arena is to train people how to play it online. Maybe they wanted to somehow ride their success of Gears of War and add a macho storyline to Unreal Tournament, or to try something new as opposed to a succession of knockout tournaments.

Whatever their reasoning was, the single player campaign was disappointing and embarrassing, like the way Malcom was depicted and the FLaG gag to name a few. I can't help but wonder if they really cared about the franchise at all when they did that. I still can't get over it--capture the flag, and this is supposed to be a serious war? If they really wanted to bring in a great story into Unreal Tournament, they should have at least took some cues from other sports movies like Rocky or even The Karate Kid that made the stakes of winning the tournament higher than just the title.

In all honesty though, after keeping an eye on Epic for all these years, what they did with UT3 actually didn't surprise me at all.

Is the game bad? No. UT3 multiplayer plays almost the same as UT2004 with a new engine. But that's really all it is to me, and I've already played UT2004 to death. UT3 came to me long after I started looking for something new, which in the intermeaning time included Counter-Strike: Source and Freespace 2. But if you still like to play UT2004, you should get its sequel.
series-Critique topic-game design topic-video games topic-writing