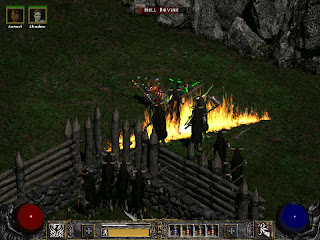 Bryan and I just finished playing through Diablo II: Lord of Destruction yesterday. We even went to The Secret Cow Level.

This was the first time I played any of the Diablo games. I'll have to admit that I was never interested in playing Diablo until recently. Over the past few weeks I've been undergoing a sort of game education regime. We are planning on creating a strategy game in the near future (hilarious, simple, and hopefully commercially successful), and since I'm not a strategy game buff I needed to do some research, which of course means playing games. Recently I've been playing all kinds of strategy games, in particular Supreme Commander which has become our favored subject in honing the strategy/micro-managing portion of my brain.

During this time we've been simultaneously working on creating a rendering engine for the OLPC, and since most of our good game ideas would require some kind of 3D graphics or advanced 2D graphics rendering techniques, we turned to past games and demoscene demos to see what was capable a decade ago. The OLPC has a slow processor, no 3D acceleration and a lot of system overhead, so seeing what was still possible on old hardware is advantageous. We pulled out MindCandy and looked at 3D games like Quake and Quake 2 that used software rendering. During this time we had the thought of playing through Diablo II. It's not a strategy game but it was in the era of games that we were looking for in technical achievements. To top it off it was the only Blizzard game I haven't played, and from what I've heard very influential and a good game to boot.

I was actually quite impressed with the 3D-ish mode of the game. Diablo has an isometric viewpoint where all of the graphics are 2D images (sprites), but in Diablo II they also added an extra 3D mode that provided subtle perspective to the viewport. It was subtle enough to not look completely fake, but being able to see trees and architecture move past in parallax made the game fell 3D without the inconveniences of developing the real thing. It also kept the visual style of the game unified, even though the visual style was rather stale (both the characters and scenery where rendered with those lousy black shadows). But compared to games like Ragnarok Online that also mixed 2D with 3D, I feel that Diablo II, a much older game, did a better job. All of the art assets in Diablo where 2D, created and rendered the same way. 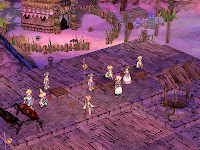 Ragnarok had real time 3D rendered environments but the 2D characters were sprites drawn in the anime style. I had it's charm but it wasn't seamless. When I played the beta I couldn't help but think about the two independent sprites (head and body) that represented my character in an obviously 3D rendered world. If the world was also built of sprites, painted in the same style as the characters, and add that little bit of 3D perspective, it would have looked more unified, be just as playable and probably wouldn't have taken any more time to create, maybe even less.

The other thing I noticed about Diablo is how much World of Warcraft is like it. It was all there: the spell lists, the quest items, the inventory, the recipes, the one-click combat, the grinding--it even felt like playing WoW. Diablo II was meant to be played online, so it's not too far of a stretch to understand how the Diablo concept went MMO. And it did, but Warcraft was a better franchise to use than Diablo.

What I did like about Diablo, aside from that 3D trick, is that you can play the entire game with your friends using a LAN and have the entire game separate from all those 15 year-old Alliance r-tards. I really hope that more class-based questing games would let you play on your own private or LAN server, independent of the internet elite/degenerate, and just enjoy the game.

I guess we should get working on that.
series-Critique topic-video games