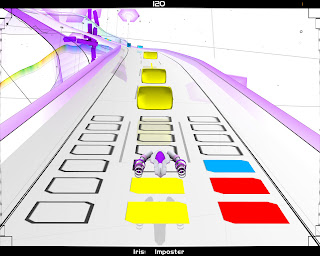 I came across this little gem of a game called Audiosurf a couple of weeks ago. It's a finalist at this year's Independent Games Festival. Today I participated in the beta weekend so I was able to play it for the first time.

The thing that drew me to Audiosurf, aside from it being an independent title, is that it's a puzzle game where each stage is generated from music files on your computer, and the same songs become the soundtrack for the stage. The speed and difficulty change with the intensity of the music you provided, and the blocks appear to the beat of the music. This works really well when you play songs that have a strong beat and lots of dynamics.

The way the puzzle works is you have to run over a block to put in on the board. The block falls in the corresponding lane (column) on the grid. To remove blocks and to get points you need 3 blocks of the same color touching each other in any configuration. Red blocks are worth the most points while the cooler-colored blocks (orange, yellow, all the way down to violet) are worth less. So picking and choosing is an important part of the game. If you don't want to put a block down you have to dodge it while you race down the track. There are special blocks as well that can do some interesting things like paint your board all one color or rearrange them. This is the Pointman mode (shown above) and seems to be the root of all the other game modes in Audiosurf. 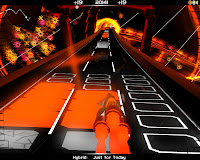 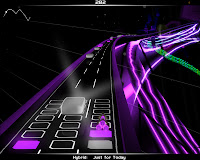 The Mono mode (shown to the left), is very simple. It plays more like a very shallow arcade-style racer than a puzzler, because with no other block colors placement doesn't matter; you just have to dodge the bad gray blocks. Then you have modes like Pusher, which gives you the option to push the blocks either left or right as you run over them while holding down the left or right mouse button respectively, making the mechanic of running over blocks to drop them on the board much more interesting. There are other modes, like Eraser, Vegas, Ninja and Double Vision (co-op) that I unfortunately wasn't able to play during the beta.

Because of that, it's hard to say if the puzzle aspect of the game is going to last longer than the novelty of how music is used. The public beta ended soon after I got to take these screenshots, so I wasn't able to capture any gameplay footage either (the beta requires confirmation with their server, so it's not playable now). Judging by the limited nature of the beta, you'll probably have to pay for the game because I can't think of any other reason for them to handle it that way. The game is scheduled to be released next month. I'll probably buy it out of principle because it's a great idea for a game and it's independently produced. In fact it's one of the best indie games I've seen in a while, and I'd like to see more of this kind of work. Vote with your dollars, right?

Speaking of which, if you are interested in other indie games, you should consider checking out Aquaria, and Armadillo Run. Both are great games.

Anyway, here's some video footage from the game courtesy of YouTube. For a perfect example of how the music works with the game, fast forward to 6:22 and watch what happens when the music gets wild.