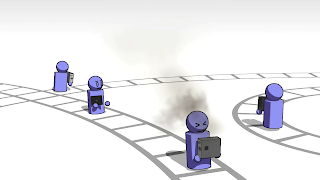 Here are the links to the Computer Medical Center Ad we just finished.

Design Process
The goal for the TV spot was to create an ad on a tight budget that didn't look local. The ad is going to be shown in movie theaters locally and on cable TV, so we wanted to create an ad that is entertaining, communicates what Computer Medical Center does and sets it apart from the competition. The game piece concept worked very well to achieve this, and all within budget.

For the second half of the ad, we decided to use photography in motion as opposed to video footage because of the cost and visual quality. The photography actually wasn't taken inside of a studio; it was at their Rexburg location. With photography it's easier to create studio quality imagery; removing a doorway here, changing the lighting there, as well as touching up other imperfections. For example, the final photo with the woman holding her laptop was taken outside while it was snowing. I used Photoshop to clean it up so it looked like a studio shot.

Production Process
We used Blender for the game pieces and After Effects for compositing and motion graphics. Each 3D shot was actually rendered in 3-5 layers. We used Photoshop's batch processing to add a thicker outline around the characters for the close up shots. 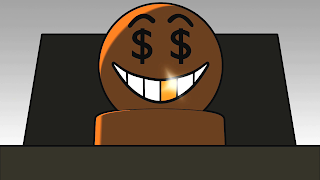 Rendering in passes let us make a lot of last minute changes to each shot. For example, the greedy character in the second ad was actually painted white, and had a orange background. There wasn't enough of a distinct connection between the character as he appeared in the first scene and the last, so we made the background black, painted him gold, added sparkles, and gave him a gold tooth all within After Effects.

The music was created using Cubasis for MIDI sequencing, Cool Edit Pro 2 for everything else, my Alesis QS6 as the instruments and Shane Hunt's mad electric guitar skills. The quality of the music was actually one of the big concerns that the client had, and it was one of my concerns because it's been so long since I've composed music, and never in this style (if you listen to my old music it's mostly electronica). We hired Aaron Pike to assist us in the composition process, which really helped us create a score with the right feel for the ad.

All of the sound effects are original. The explosion sound was actually me blowing into the mic. The computer crashing sound was created with real computer parts being dropped down onto a piece of leftover plywood from the Touch the Table project. If you listen closely, you can actually hear the tapping of the characters as they walk by. The tapping sound was created by using the same rotary lead pointer that we used a prop to illustrate how the characters would walk.

Postmortem
This was our first completed animation project as a studio, so we learned quite a bit about working with Blender.

The part of production that took the most time was the animation. We spent a lot of time making sure that the walk cycles were perfect. It did take us some time to get used to the walk cycle tools in Blender, but we eventually got it down.

We also learned some interesting things about using Blender in a collaborative environment. Linking always seemed to be an issue (typically user error by me), especially with the sequence editor where none of the links are relative. Fortunately I was the only one working on the compositing so that wouldn't have been an issue, but I decided to use After Effects for that task anyway because compositing was more direct. Note to Blender Foundation: make all links relative by default; that will solve a lot of problems. Also, being able to control the thickness of the lines in edge rendering would have been helpful. In 720p those lines are really thin, but we used Photoshop's batch processing to fix that.

Despite those small things, Blender was more than sufficient for this project, and we were able to render the entire ad very quickly on just one computer.

The music was actually my favorite part of the whole project. This was the first time I've used Cubasis as part of my process and had an electric guitar in my music, which I've always wanted to do. The final music is fantastic. That gave us a lot of confidence in our ability to produce soundtracks in the future. It made me remember what I liked about music in the first place, so I'm definitely going to pick up music composition as a hobby again.

In short, the ad was very successful, and we can't wait to see it in the theaters and on TV.
series-My Work topic-blender topic-motion design topic-music topic-work