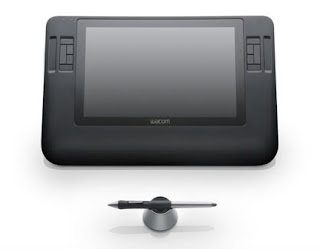 I just checked one of my junk mail accounts, and received a pleasant announcement from Wacom. They just released something called the Cintiq 12WX. It's a smaller, and much cheaper model of in the Cintiq family.

Now, it's been my illustrator fantasy to own a Cintiq, or at least be able to play with one. Fortunately at Siggraph 2007 I got that opportunity.

The Cintiq 21UX I played around with was a US$2499 piece of equipment. That's a lot of value for the bastard child of an LCD screen and a tablet to live up to. After I used it for about an hour, it almost lived up to my expectations. Yes, drawing with it is much easier, is way more natural, and the pen tilt is easier to visualize (which is really handy because I use a lot of calligraphy brushes).

However, I'm not used to having my arm cover the image I'm working on. This makes right-clicking unusual at first because the menu appears directly underneath your hand. Also, when I'm using something that resembles pen and paper, I'm expecting the ink to come directly from the stylus. If you calibrate your screen and never move your head (or the Cintiq), then that's not a problem. But you always move your head and tilt the Cintiq, so registration always seems a little off. Adding small details was a bit trickier with the Cintiq, as opposed to using my tablet, because of registration problems and my hand covering the image. After a while I learned to look at the cursor instead of the tip of the stylus, and that helped. The latency is also more apparent. There would be times where the stylus tip would be an inch ahead of the Photoshop brush. But that was only when I was drawing quickly.

Everything I just listed are all very minor problems that I quickly got adjusted to. Comparing the adjustments that I had to make when I first started using the Wacom tablets, I'd say it would be worth the US$2499, and especially the Cintiq 20WXSX at US$1999, provided that you could afford it. But those are not the only problems and they are not as trivial.

The Cintiq is huge! Even rotating the thing, which is really nice to be able to do when you are drawing, is difficult. There are two cables that plug into the back (DVI and power) that get in the way if you rotate it at a certain angle. And there isn't much room for a keyboard on the desk. Yes, no room for a keyboard if you want to work comfortably. You could set the Cintiq upright and use it like drawing on an upright monitor, but your arms get tired, and I like having the drawing surface a lower and a closer. It's also way too big to have in your lap comfortably. If I didn't use keyboard shortcuts this wouldn't be a problem, but it is.

So that was my big issue with it; it was too big. Too big for easy rotation and lap comfort, and no room for a keyboard, which I can't work as quickly without.

Then I received the email about this Cintiq 12WX. It's only 4.4 pounds, as thin as the tablets, has a 1280x800 wide screen display, and the tablet/stylus is just as feature-full as the other Cintiqs. The only difference I can tell is that the model number for the stylus is ZP-501ESE. Notice the appended SE. I'm not sure if that's a better or worse model than the ZP-501E that the other Cintiqs have, but it has the same technical specifications.

The only foreseeable downside with the 12WX is also the size. Not because it's too big, but--as the same suggests--it's a 12" screen. That puts it at the size of the Intuos3 6x11. Basically I'd be upgrading my current Intuos2 6x8 to a Cintiq 6x11. A difference of $700. This is the part where I ask myself if it's worth it.

So just before I finish proofreading this blog post and go to bed, I pick up my Intous2, put it in my lap, and imagine that I'm drawing on a tablet that's 3 inches wider and has a screen that I can draw directly onto. My hand sits comfortable on the home row of the keyboard, performing shortcuts with ease. Then I realize that I could totally move this thing over to my drafting table and start using it. Or, I could even lay down in bed and draw ideas out as if it was a sketch book. I wouldn't even need a book light. Hey, this thing could totally fit in my backpack too.

Update: When we went to SIGGRAPH 2008 we spoke with the guys at the Wacom booth regarding the problem with cables getting in the way and not having enough desk space, he said that many artists attach their Cintiq to a desk mount arm. He recommended the Ergotron brand. I know someone who now owns a Cintiq 12WX and a desk mount arm and he loves it.
series-news topic-electronics topic-illustration