February 15, 2009
[EDIT] Scruss provide some information on how to do this under Cygwin (and Linux I'm sure) at http://scruss.com/blog/2010/05/09/creating-a-truetype-font-from-your-handwriting-with-your-scanner-your-printer-and-fontforge/ I haven't tried it out yet, (when I do I'll post it here) but this could very well come in handy. Thanks for the tip!

Many of the designers I know are typophiles. We live and breath type and will search for hours trying to find the right typeface, and when we are not doing that we'll spend weeks trying to create one. Here's a couple of font tools that I've used in the past: YourFonts.com automatically creates a TrueType font from a scan of your handwriting, and FontForge allows you to create fonts from scratch and of course edit existing ones. 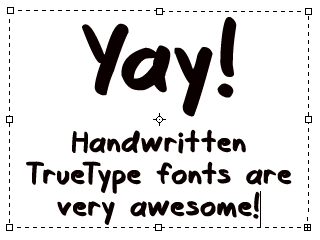 For years I've wanted to create a font of my own handwriting. Originally my motivation for this was out of novelty because having your handwriting as a TrueType font is just plain cool. But now that I'm doing more concept art I wanted my handwriting font because using a font like Myriad Pro for notes just doesn't fit well with the loose sketches and paintings. Even though it takes some time to set up the gridlines and write my notes on screen using my tablet, I do it anyway because it just looks right as opposed to using a refined font.

For a while I've put off making that font because of how long it would take for me to make one, but now there's YourFonts.com. After about 20 minutes of writing my font into the template they provided (which I did in Photoshop so it would look like I wrote it with a tablet) I was able to create a TrueType font of my handwriting!

The raster to vector conversion was good, and aside from some kerning issues (which I'll get into in a second) the font was perfect. So it was a good thing I waited because this site saved me a lot of time. 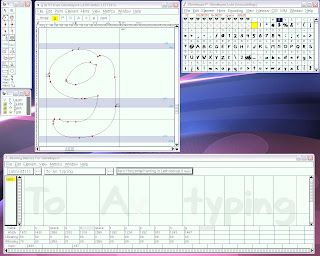 So about those kerning issues. YourFonts.com creates a TrueType font with the left and right bearings at a fixed distance away from the glyph. And as any type designer would know this isn't always desirable, and I definitely wanted to change the width of the space character, so to fix all of that I used a powerful open source program called FontForge.

FontForge isn't always a super easy program to install. It's originally a Linux program, and if you are using Ubuntu you simply go to Add New Programs, search for FontForge, and it'll download and install it for you automatically. Mac users will have a harder time installing it, but for those of you using Windows you could have a frustrating experience; you'll need to install Cygwin.

Now, I've installed FontForge on Windows before so I knew what I was getting into. I do have it installed on my Fedora partition but having to reboot just to edit a font is troublesome. I thought that I could sidestep the Cygwin nightmare by installing andLinux which is basically Ubuntu running on something that is kind of like a virtual machine (in that it needs dedicated RAM) just so I could install FontForge without problems. Unfortunately, it crashed a lot and FontForge ran slowly too, so I decided to go ahead and install Cygwin anyway which I do still recommend if you are going to be running FontForge in Windows.

Here's some tips about installing it because the documentation on the FontForge site on how to install Cygwin properly is lacking.

From the server list select mirror.kernel.org. It's a fast and reliable server. When you go to select the packages that need to be installed, first make sure that the checkbox on the bottom that says "hide obsolete packages" is unchecked, as FontForge needs some obsolete packages. And I found clicking on the view button so it's set to "full" helped my find everything too.

The good news is that making sure that all of the packages are selected is the hard part. The rest of the steps on how to install it are pretty straight forward.

I will add though that FontForge, even though it's probably the best font editing software out there, the program is pretty ugly. But hey, once you install it and go through the tutorials they have on the FontForge site it's a pretty nice program.

After I installed FontForge I started to adjust the kerning between each pair of characters. Yes, you can set the kern for any pair of characters that you want and have the kern amount stored in the font so it's kerned automatically as you type it; it's just a matter of typing the letters into the Metric Window and drag and drop the lines between them.

But first you need to create a lookup subtable for the kern amount. And again, I do suggest you read the manual because I'm not going to write a huge tutorial on how to do this, but here's some hints: If you try to adjust the kerning it'll bring the New Lookup Subtable dialog for you. The subtable type should already be set to "pair position (kerning)", click on the "
series-Massively Useful Software topic-graphic design topic-illustration topic-software topic-websites

Zoltan Hawryluk said…
What a great post. With the recent interest with web-page font-embedding, I'm sure there are a lot of people who will want to start using FontForge to make and edit fonts. A great resource for Windows users. Thanks.
October 16, 2009 at 3:33 PM

scruss said…
Glen, if you want to make more fonts from a YourFonts-like template, this workflow should work under Cygwin: creating a TrueType font from your handwriting with your scanner, your printer, and FontForge.
March 27, 2011 at 10:30 AM

Anonymous said…
Installing it on the mac is much simpler with "Homebrew":