The Structure of Man Primer 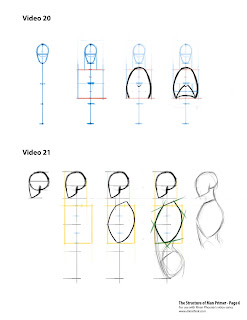 Riven Phoenix's The Structure of Man series, which I've evangelized ever since I received my copy of the DVD set, has to be the best and most affordable (US$45) way to learn how to draw people from memory. Since leaving Rexburg I've had more time to continue watching the series--finally; I've owned it for about 9 months with not enough time to watch it until recently.

When I initially started The Structure of Man series I went through the first 19 videos with pencil and paper rather quickly, but then I realized that my final sketches didn't show much of the process of how I got to the final. All the important stuff that the video series is teaching, like the simplified angles and proportions that make up the human body were gone when I started rendering. I could watch the video over and over again until I memorized the formulas, but all I needed was some kind of primer that had all the formulas down on paper as a quick and complete reference.

That gave me the idea of creating a primer for the series. I wanted to keep more than just the final sketches as reference, I wanted to save the whole process. So I started the series over, drawing every sketch in Photoshop to use layers to save every phase of the drawing. So far it's become a massively helpful reference for me and my friends who have also been going through the series.

Another reason why I'm putting this together is that I haven't found a really good reference book that shows you the formulas of how to draw the human body in bite-sized chucks. Riven Phoenix has a great method of teaching so you'll remember all of the proportions. But it's a video series, not a quick reference book. Most books on this subject only show what the final drawing should look like, which isn't very helpful for someone trying to learn all of the proportions of the human body. Other anatomy books show too much information, so The Structure of Man has been an excellent substitute.

I probably won't release the primer to the public with respect to the creator; the primer is meant to have every step of the video series laid out on the page so that it would be possible to learn everything in the video series without actually watching the videos. So I'll have to ask him for permission. The primer does include supplemental pages of photographs and illustrations on anatomy because I'm planning on making it my one-stop resource for anatomy reference after I'm done with it.

If you are interested, go buy The Structure of Man. He also just released another short video series called The Sketch Book of Drawing Techniques. I haven't purchased that DVD yet, but it's probably worth watching.
series-Resources for Artists topic-illustration topic-instructional design topic-video tutorials

Unknown said…
Hey this is a GREAT idea.. I think you should make it public though. ;) Riven should include something like this with the videos.
November 17, 2009 at 11:20 PM